Jim Zinn had worked nearly 40 years for the telephone company when he answered an important call.

In the summer of 2000, the MonValley District Superintendent asked Zinn to help at the Walnut Grove Charge. One month after a new pastor had arrived, her cancer had returned and she was too ill to preach. Within less than a year she passed away. Zinn, a lay speaker and member of another congregation, filled in for the remainder of the year. At the next annual conference he was appointed assigned supply and the following year he was appointed as a Licensed Local Pastor. He’s been there ever since.

“We have fun,” laughs Zinn. “Even in the midst of all the hardships of ministry, it’s still fun to minister to the people.”

The Holy Spirit is moving at Walnut Grove, Levels and Colfax churches and Jim Zinn is thrilled to be along for the journey.  His authentic down-to-earth personality has resonated with members of these congregations and people in the surrounding communities.

The churches are growing.

If you ask Zinn why, he will point to (among other things) bells, breakfast and baptism.

Zinn says new ideas from the congregation can spark excitement and participation.

One day a member of the congregation approached Zinn and remarked that her mother’s church had handbells. She wondered if maybe this church could, too.

“So we bought handbells,” says Zinn.

Children from the church and those who came for Vacation Bible School all look forward to playing the multi-colored bells.

“They’d tell their parents, ‘It’s bell Sunday! We have to go,’” says Zinn. “Last Sunday they played and I think there were 22 of them across the front of the church. That’s why we have the young people coming. It’s just exciting.”

For about five years, Walnut Grove has hosted a once-a-month Saturday morning men’s breakfast. On average about 60 men attend each month, and Zinn says about half of those who come don’t attend church anywhere.

“When a man’s come to breakfast, he’s accomplished two things,” says Zinn. “He walked into a church and the roof didn’t fall in. And he sat at a table with a group and was accepted and a part of. Right there’s two big hurdles.”

Zinn says the breakfast is successful because the men own it.

“They gather the food. They call people to remind them. They get speakers. They cook the food,” says Zinn. “There are only two requirements. Be male. Be hungry.”

In addition to filling their stomachs and enjoying each other’s company, the men collect money to help the boys at Stepping Stones, a nearby Level I residential treatment center for troubled boys. They buy them what they need to get started each school year and they provide for them at Christmas.

Zinn believes building relationship and getting to know people is a powerful way to witness for Christ.

“Table time is what’s missing,” states Zinn. “If you want to get to know people in your church [or your community], you sit down at a covered dish dinner or a picnic and share a meal and you really get to know the people. One hour on Sunday morning – that’s not enough to learn how to be the church.”

“On that particular day, we used all three forms of baptism,” recalls Zinn.

Most waded into the river to be immersed. A few could not enter the water for health reasons and Zinn poured river water over them along the bank.

One infant was carried out into the river and water was sprinkled on her.

An additional person was baptized at the church a few weeks later.

“It’s been a truly blessed year,” Zinn smiles. “Anywhere from this two-month-old to one of these ladies about 82 years old and everywhere in between. Teenagers, moms, dads, sons, and daughters as a family unit.” 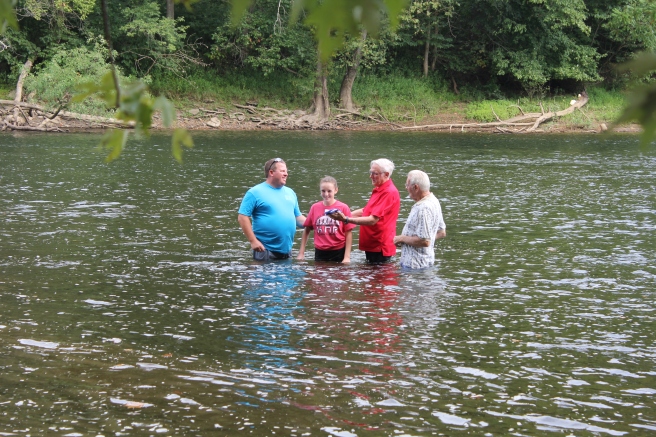 Zinn plans to retire in 2017. He will be 72, the mandatory retirement age for United Methodist pastors. He is already working with the congregations to prepare them for moving forward when a new pastor is appointed to serve the charge. He has faith that the momentum and passion for serving the community and building up the Body of Christ will continue.

*This post first appeared in the Winter 2015 (December) edition of The Mountain Circuit, a publication of the West Virginia Annual Conference.

Three-year-old Jordan makes a bee-line to a first-time visitor and offers a warm hug of welcome.

It’s a move that undoubtedly meets with approval from the Cloud of Witnesses at Trinity United Methodist Church in Fairmont, West Virginia.

Trinity marked its 145th anniversary this month and its Cloud of Witnesses was palpable as church members and guests proclaimed the anniversary theme: “God is Not Dead!”

God’s not dead and neither is Trinity’s spirit and tradition of faith, service, family and leadership.

Trinity traces its beginning to 1869, just four years after the Emancipation Proclamation, with the formation of the John Wesley Methodist Episcopal Church for Negroes. Its present day church building came later – in 1911. 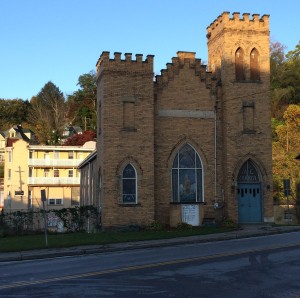 Its members have ministered and witnessed through the early post-slavery days, the Great Depression, segregation, the Civil Rights struggle and on into the new millennium. Its name changed over the years to reflect the various eras of Methodist church structure and organization. At one time it, along with all African American Methodist congregations, was part of the “Central Jurisdiction” rather than the more geographically-oriented West Virginia Annual Conference. It became part of the West Virginia conference in 1965, after changes to Methodist structure. (For more about this period of Methodist history, click here.)

This Was High Church

Charlotte Meade traces her connection to the church back to her great-grandfather, one of Trinity’s founders.  She remembers growing up in the 1940’s and 50’s in a strong, vibrant congregation – one that celebrated high church with a processing choir, trained acolytes, and “one of the best organists in the state.”  There was a solid Sunday School program, active youth group, and sense of connection.

“You looked forward to Sundays,” says Meade. She remembers people generally walked to and from church in those days, taking time to visit and window shop on their way home.

“We were trained for leadership in the church,” says Meade. “That was strong. Particularly for the young people.”

Trinity has fewer members today than it used to and is now part of a two-point charge. But it has not lost its essence.  Even a first-time visitor can sense it. At Trinity, you are family. Whether your ancestors were among those who started the congregation just after the Emancipation Proclamation or you are a newcomer from the apartment high rise across the street. 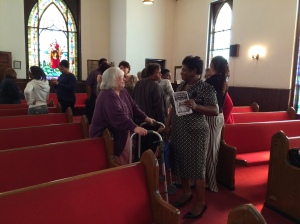 Jordan’s warm welcome, the tempting smell of breakfast casseroles wafting up into the sanctuary, and the bright sound of greetings and laughter mark the beginning of Trinity’s anniversary celebration and hint at a vibrant church family.

“We belong to it,” says Meade. “And in some ways we feel a responsibility to keep it going as long as we can.”

A basket of rocks holds a place of honor next to the altar. Each rock represents a member of Trinity’s Cloud of Witnesses. New rocks are added each year during the October anniversary celebration. 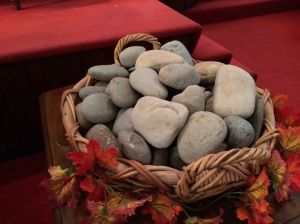 Rev. Junius Lewis, the guest preacher for this morning’s anniversary worship service, has never been to Trinity before today and he didn’t know about the basket of rocks. But they serve as an unplanned illustration for his sermon about the Israelites crossing the Jordan.

When the whole nation had finished crossing the Jordan, the Lord said to Joshua, “Choose twelve men from among the people, one from each tribe, and tell them to take up twelve stones from the middle of the Jordan, from right where the priests are standing, and carry them over with you and put them down at the place where you stay tonight.”

So Joshua called together the twelve men he had appointed from the Israelites, one from each tribe, and said to them, “Go over before the ark of the Lord your God into the middle of the Jordan. Each of you is to take up a stone on his shoulder, according to the number of the tribes of the Israelites, to serve as a sign among you. In the future, when your children ask you, ‘What do these stones mean?’ tell them that the flow of the Jordan was cut off before the ark of the covenant of the Lord. When it crossed the Jordan, the waters of the Jordan were cut off. These stones are to be a memorial to the people of Israel forever.” – Joshua 4:1-7 NIV

Lewis takes a rock from the basket next to the altar and holds it up to the congregation. This church stands, he says, because people prayed, and struggled and sacrificed. They put their faith and hope and trust in Christ.

The message? Keep sharing the story. Pass it on from generation to generation. Celebrate the past, serve the present and trust in the future.

God is not dead.

Trinity’s members are comfortable sharing the story and their stories. During morning worship, those who are able stand and create a circle around the sanctuary. In an unhurried and patient fashion, many of them share prayer concerns and praises. One voice at a time. Sometimes simply naming a name, sometimes offering more details, they share their stories and then pray together.

Royce Lyden is in that circle. She and her family have been part of Trinity for generations.

“Over the years our congregation has decreased in size,” she says. “But what that did was provided leadership opportunity and training for members of the church. Sometimes my kids used to come to church and say, ‘well I wonder what we’re going to have to do today. Are we going to take up the offering or sweep the walk or will we have to give the sermon?’”

Lyden and others have served in leadership roles at Trinity and beyond, up to and including serving as members of the General Conference of the United Methodist Church.

She values the leadership training she received as part of the Trinity family, and wants to see that opportunity continue for future generations. There is not a strong Sunday School program currently, but young people are intentionally included and empowered within the congregation. Youth and young adults played key and visible roles during the anniversary celebrations.

The church sits at a crossroads – literally and figuratively.  Just steps away from a busy intersection, the church is perched on a small patch of ground with no parking or room for expansion. Upkeep of the building has become a challenge and it is not handicap accessible.

Both Meade and Lyden say the congregation is prayerfully considering the future.